Was the original Santa Clause an Arctic shaman? And a new setback for trials of LSD for the treatment of generalized anxiety disorder (GAD)

MindMed (NASDAQ: MNMD) announced that the FDA placed a clinical hold on its Investigational New Drug (IND) submission intended to support the initiation of a Phase 2b trial of LSD for the treatment of generalized anxiety disorder (GAD). Details on why the hold was placed are expected next month. Here’s more: https://finance.yahoo.com/news/mindmed-provides-status-ind-phase-123000895.html

Congressman Earl Blumenauer has circulated a letter through Congress, requesting that colleagues join him in demanding the DEA allow psilocybin treatment for terminally ill patients. While the entire concept of a terminally-ill patient needing permission to consume mushrooms is bizarre, it is, nonetheless, a reality. You can read the full text of the letter here: https://www.marijuanamoment.net/congressman-asks-colleagues-to-demand-dea-allow-psilocybin-treatment-for-terminal-patients/

As part of renewed interest in using psychedelics to treat severe mental health conditions, especially for people who have not had success with more traditional treatments, researchers at the University of Texas in Austin have launched the Center for Psychedelic Research and Therapy. The center will conduct clinical research to better understand the potential for drugs such as psilocybin, MDMA, ibogaine and ayahuasca to treat severe depression, anxiety and PTSD when used as part of treatment with a trained provider. Here’s more: https://news.utexas.edu/2021/12/16/center-to-study-psychedelics-for-treatment-of-depression-anxiety-ptsd-launches-at-ut-austins-dell-med/

Did you know there’s a theory that the story of Santa is connected to the use of psychedelics and Shamans?

As explained by the producers of the documentary, Fantastic Fungi, the figure of Santa Claus originally came from Nordic countries, where Arctic shamans used to dole out psychedelic mushrooms as part of their winter solstice celebrations.

They dressed in red clothing with white spots, similar to Amanita mushrooms. People enjoyed a magical experience and communed with nature on the night of the solstice. Just like Santa enters homes through the chimney, Arctic shamans typically entered snow-blocked homes through an opening in the roof.

Nordic shamans had a deep connection with reindeer as well. They were generally recognized as the spirit animals for the shamans. Under the influence of magic mushrooms, it’s easy to see how someone could hallucinate flying reindeer beneath a beautiful night sky in December.

It’s just a theory, but what a fascinating theory it is! 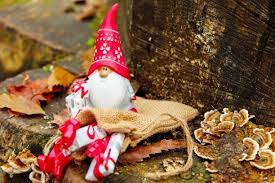